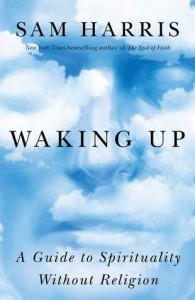 Waking Up: A Guide to Spirituality without Religion, by Sam Harris.  Simon & Schuster, 2014.

Harris covers highlights of his own inner journey and what we currently know about the nature of consciousness, concluding with comments on evaluating gurus, investigating NDEs, and drug use as a possible path toward enlightenment.  Meditation practice can be helpful to everyone as a means of reducing the personal suffering brought about by constant distraction, and needn’t have any religious component.  Harris’ dedication to exploring the self, his considerable experience attending meditation retreats–a total of two years, including some three-month periods–plus his background as a neuroscientist give the book an unusual and authentic flavor. Definitely worth pondering. 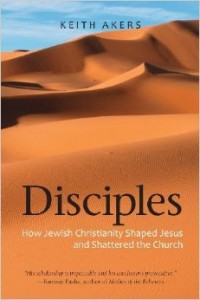 Following up on his previous book The Lost Religion of Jesus, Keith Akers continues his examination of Christianity in its earliest stages, presenting a very different view from what Christianity later became under Paul. This Jewish Christian movement, which practiced simple living, nonviolence and vegetarianism, has been completely lost, even though it represented what Jesus actually taught. Contemporary scholars of religion are mostly unaware of its existence, yet the author’s conclusions are based solidly on historical sources of the period.  For more details, visit the the author’s blog here.

Had Christianity stayed closer to its original vision, we would likely have a kinder world in which resources would be more equitably shared and no climate/environmental crisis would be looming on the horizon. The more people who are Christian read this book and begin to work for change in their churches, the better the future will be. 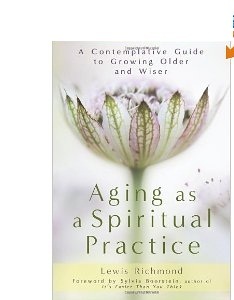 Aging As A Spiritual Practice: A Contemplative Guide to Growing Older and Wiser, by Lewis Richmond.  Gotham, 2012.

This has much that will be helpful to the over-60 as well as to younger people who are caring for aging family members. The text is interspersed with the author’s reminiscences of studying in his youth with famed Buddhist teacher Shunryu Suzuki, and “Contemplative Reflections” that assist in looking at life in helpful ways quite different from mainstream viewpoints. Not just for Buddhists or meditators, though, the book provides comfort for anyone dealing with aging-related issues. The author, in his mid-60’s, has experienced severe illnesses himself, including two weeks in a coma, so writes with understanding of facing physical and mental difficulties, yet remaining positive.
A similar book to read alongside is This Is Getting Old: Zen Thoughts on Aging with Humor and Dignity, by Susan Moon (2010).

Mirabehn was a British-born close associate of Mohandas Gandhi, working with him from 1925 until the end of his life. She was not just a secretary or assistant, but a diplomatic adviser and project manager. On occasion she was even sent by Gandhi to represent him in negotiations with British officials. She stayed on in India until 1959, continuing her work to improve the lives of the poor.
As a young adult, she had been told by a mentor that Gandhi was “another Christ,” and from then on her mind was made up to go and work for him. Her dedication was rock-solid, as it required her to face a much harder life than she would have had at home in England: stressful political situations and imprisonment, extremely hot humid climate, poor sanitation, typhoid and repeated bouts of malaria, living in mud huts with scorpions and ticks, hard daily physical labor, language and cultural barriers, etc. She was tough, too–after all this, she lived to be nearly 90! This is her story in her own words, told as though the reader was sitting in front of her, and builds a solid on-the-ground foundation under other more philosophical commentaries about Gandhi and his work.

Beyond Religion: Ethics for a Whole World, by His Holiness the Dalai Lama XIV. Houghton Mifflin Harcourt, 2011.

I agree with the Dalai Lama that only if the world’s people succeed in finding common ground Beyond Religion is there a chance of working together for any kind of a sane future. I wondered what he was going to suggest, and found myself reading with interest. He describes compassion–the foundation of secular ethics–in detail, what it is and isn’t (e.g. it isn’t meekness). He shows why the practice of compassion and restraint is necessary for a sustainable environment, stable governments, as well as personal well-being, and why such efforts must be undertaken outside of religion to succeed globally. END_OF_DOCUMENT_TOKEN_TO_BE_REPLACED

Will Tuttle proposes that all the violence, exploitation, and dysfunction we experience in our society has its origin in what he calls the “herding culture”, our millennia-long practice of using animals for food. It’s a compelling idea, and I read the entire book to see where he was going with this. As a long-time vegan, I’m well aware of the horrendous cruelty we inflict in raising, confining, and torturing animals in factory farms; Tuttle’s chapters describing this are vivid and convincing. That our collective health suffers greatly from eating animal products is also well-established. He points out the depth of invisibility and unquestioned support that characterizes meat-eating and animal exploitation. I liked his chapters on the role of religion and science in this, and his description of his own personal journey. By emphasizing the spiritual aspect, he inspires as well as informs. END_OF_DOCUMENT_TOKEN_TO_BE_REPLACED