One of the ways we work toward peace is by getting to know and understand other peoples’ cultures.  The more we can understand why people act the way they do, what they believe and value, the more we can empathize and develop compassion for them.

I recently saw the “Traveling the Silk Road” exhibit at the Denver Museum of Nature and Science, and read the 250-page companion book by the same title.  Here was a massive cultural exchange program that went on for centuries!  Fabulous luxury goods like spices and exotic foods, exquisite porcelain and glassware, intricately-woven fabrics, scented oils, paper and books, were not all that was traded: travelers exchanged languages, stories and belief systems, music and dance, manufacturing technologies, and state-of-the-art scientific discoveries, among many other aspects of their lives. END_OF_DOCUMENT_TOKEN_TO_BE_REPLACED 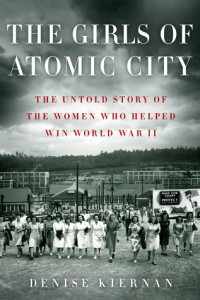 The Girls of Atomic City: The Untold Story of the Women Who Helped Win World War II, by Denise Kiernan.  Simon & Schuster, 2013.

I visit Oak Ridge, Tennessee, the “Atomic City” of the title, every year because my husband grew up there and we visit his siblings who still live in the area. I knew something of its history, but learned a lot more by reading this. I’d thought the first residents were just a few thousand scientists and their assistants, but in fact the scale of this secret city was huge: 78,000 residents at its peak, including tens of thousands of non-technical support staff; extensive construction, including the largest building on earth; a major bus system; and much more. When the government decided to build a city there, many hundreds of people who had lived on the land, sometimes for generations, lost it in a matter of a few weeks. The amount of money, workers, and resources it took for the single project of enriching uranium for bomb fuel was astonishing. END_OF_DOCUMENT_TOKEN_TO_BE_REPLACED